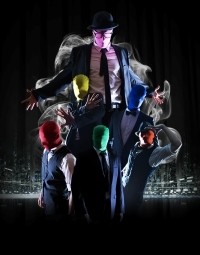 Swagamama are 6 friends from different dance, music and visual arts backgrounds who teamed up to form an elite competition dance crew.

Since coming together they have been fortunate enough to win every dance competition they have entered, against the top dance crews from around Australia and New Zealand.

Recently they were crowned House of Champions 2013 Open Champions, in one of the largest dance comps in the country.

The key to this success is an unusual variety of skills. Red Bull 2012 Australian Breakdance Champion Jacob Goodridge is joined by internationally renowned robot and animation specialists Chris Vitnell and Bryce Jarrett. They are joined by Queensland’s top popping and locking dancer and teacher Sheru Bharadwaja, as featured in the 2013 Southern Comfort national ad campaign. Acrobatics and flipping expert Mark Barber, and musician and sound designer Paul Tindle
round out the crew.

Despite being a relatively newly formed act, Swagamama’s notoriety as a performance troupe has arisen because of their use of theatrical narrative, musical comedy and spectacular tricks in combination with high level dance skills.

Aside from the acrobatics and illusions there are two uncommon traits of their show: Firstly, Swagamama perform with a crowd-pleasing entertainment focus rather than a skills/technique focus as a usual dance act would. Their comical and musical charisma makes hiphop dancing accessible to the broader public.